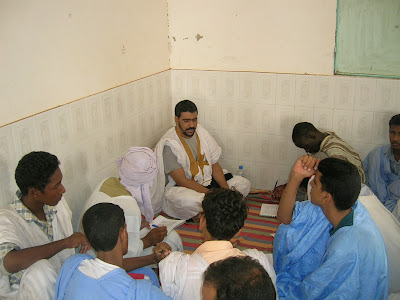 His name is Muhammad Lamin bin Ad-Dah
He was born in 1966 in the region of Irkiz and is a direct descandant of the Prophet peace be upon him. He studied the Quran and memorised it aged 11 at the hand of Mafouz bin al-Haaj al-Hasan and later on took ijaza in Imam Nafi'i recitations (Warsh and Qalun) at the hand of Shaykh Bah (1989)
He studied the normal mahdhara curriculum in all subjects and has started teaching in Nabbaghiya during the mid nineties.
Publié par abdelmalik à 07:57 6 commentaires:

Although requirements for the admission of students is not systematised and formal, the mahdhara of Nabbaghiya would requires students to have an intermediate level of Arabic and a genuine interest in studying Islamic sciences.
Publié par abdelmalik à 01:11 2 commentaires:

The Prophet (P.B.U.H.) said: "Who builds a Mosque for God (S.W.T.), even if it was as small as a birds nest, God would then reward him by building him a house in heaven". Is there any Mosque that small? The answer is of course not. But the meaning is that if you participated in building a Mosque, even for a couple of pounds, God would then build you a house in heaven. See how God, with His mercy, did not leave this reward open just for rich people! The reward can be achieved by poor people as well. This is by participating in good deeds as much as they can! And God blesses their participation; He is the Bounteous and Generous.

Nabbaghiya is building a mosque for its school. The classes will take place in this mosque. We need your fanancial support for this to happen! Please donate generously! All the details of this project is available on:
http://hottestguruzone.blogspot.com/2008_06_01_archive.html
Publié par abdelmalik à 16:08 Aucun commentaire:

His studies: Ustadh Arafat completed memorising the Quran in 1984, aged 12. 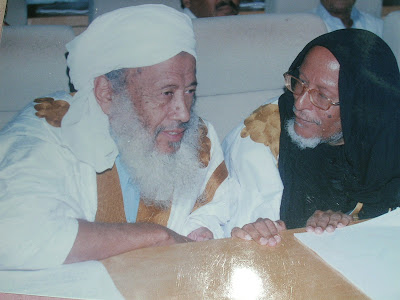 Shaykh Bah, on the right, conversing with Shaykh 'Addud from Umm ul-Qura Mahdhara at the conference organised by Shaykh Abdullah bin Bayah held in Nouakchott last March.
His name is Muhammad Fall Ibn Abdullah Ibn Muhammad Fall Ibn Babah al-'Alawi, known as Sheikh Bah. He was born in 1936, in Nabbaghiya.
1/ His quranic studies and sciences relating to it:
He completed the memorisation of the Quran at the age of eight, under a number of teachers, men and women.
The Mauritanian scholar studied tajweed and the sciences relating directly to the Quran initially with Sheikh Muhammad Lamin Ibn Baddi al-'Alawi (who passed away in 1962) - may God be pleased with him. The Shaykh recited the Quran a second time in the city of Medina Munawwira at the hand of a Shami scholar, Tayssir Tawfik, as well as other scholars that he met there.
2/ His studies with his Shaykh Muhammad Mukhtar:
Back in his home village, Nabbaghiya, our beloved teacher studied Grammar, Linguistics, Jurisprudence, Hadiths, Seerah at the feet of his Shaykh, Muhammad Abdullah Ibn Muhammad Mukhtar al-'Alawi, deceased in 1974, keeping his company for almost 20 years. During this period he narrated from his Shaykh numerous poems, some litterature and history.
3/ Other studies:
As to Usul (foundations of Islamic jurisprudence), Theology (Kalam), Logic (Mantiq), Bayan (Rhetorics) and other sciences, he did not studied them with a specific teacher, but rather through extensive readings of books and commentaries, supported by a gifted mind, and of course with the authorization of one of his Shaykhs.
He then started to teach until he totally mastered them, God bless him!
4/His travels to the Haramayn for hajj and 'umra:
His first travel to hajj was in 1957; he then performed hajj another two times, in 1962 and 1971, and has performed 'umra a many times.
During those travels, he met and sat with numerous scholars of many different trends, including the renown hadith scholar Muhammad Hafiz Ibn Abdul-Latif Tijani Misri (who past away in 1977), which he had met for the first time in Medina Munawwara in 1957. Their relationship would then grow and strenghten; he loved him very much, and read to him parts of Bukhari, Muslim, Abu Dawud, Tirmidhi and Ibn Majah. Shaykh Muhmmad Hafiz thus gave him an Ijaza (licence) for those books of hadith. The two scholars met many times; their last meeting was in 1966, when the Egyptian scholar visited Nabbaghiya.
Shaykh Bah also met with the big hadith scholar Mekki Kettani in Medina Munawwara in 1962. He also received an Ijaza from him for all major hadith books. Shaykh Bah received licenses from other scholars from Hijaz countries, Sham, Morocco and other places, such as Abu Hassan Nadawi al-Hindi. He even met with Abdul Aziz Ibn Baz!
5/ His other travels:
Our Shinguetti scholar did numerous trips to Morocco, sometime for long periods, regularly buying books from specialised bookshops. He also spent time in the public library in Rabat, becoming familiar to its staff, introducing books unknown to them, as Shaykh Bah had visited the libraries of Medina, including that of the Prophet's mosque. He also visited the most renown libraries of Damascus and Beirut. He also took advantage of the libraries of some of his Shaykhs in Senegal. His extensive reading in those various libraries demonstrate his degree of scholarship and is quite unusual for a Mauritanian scholar...
6/ His teaching debuts in Dakar then Mauritania:
The Shaykh started teaching in Dakar, Senegal, in 1956, when people from around Senegal, in the capital for trade, were visiting him all day long to read, sometime way into the night.
The desert scholar then started teaching in Nabbaghiya, Mauritania, in early 1962, were he is presently the Shaykh of the traditionnal Islamic school for Islamic Sciences of Nabbaghiya.
7/ Some books he authored:
Shaykh Bah has written numerous books, including a tafsir (commentary) of the Quran in eight volumes, a commentary on the character of the Prophet, Peace be upon him, that is published, "Rishq al-Siham", an apology of sufism and the tijjani tariqa, currently out of print, "Rissalat al-Islamiyah fii Dhami al-Tabarruj wa Mudharihi", an epistle he wrote when the American first landing on the moon, explaining that whether one believes it was true or not was not relating to creed, as some jurists had stated at the time. This epistle was published in the Moroccan magazine "Dawatul Haqq". He also wrote "Tasjil al-Tikrar", a commentary of the Ihmirar of Ibn Buna al-Jikani, and a commentary of the Diwan of Ghilan. He has some abridged commentaries and annotations on Maraqi Sa'ud of Ibn al-Haaj Ibrahim al'Alawi on Usul and on the mandhumah of Akhdhari on Bayan, and also on Khalil and other texts that are read in the mahdhara. Shaykh Bah also wrote many fatwas on a variety of topics.
(Written by Muhammad Abdullah, translated and edited by Abdelmalik Fransi)
Publié par abdelmalik à 04:23 3 commentaires: 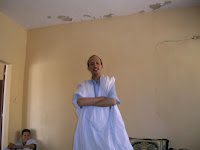 Date and place of birth:

Ustadh Abdullah was born in 1969 in the village of Nabbaghiya

Ustadh Abdullah studied the Quran in Nabbaghiya up until 1980. He then, under his father's tuitions, Shaykh Bah, read a variety of texts on different Islamic sciences. 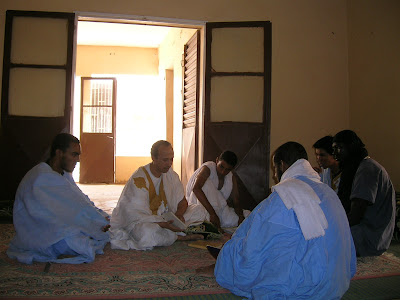 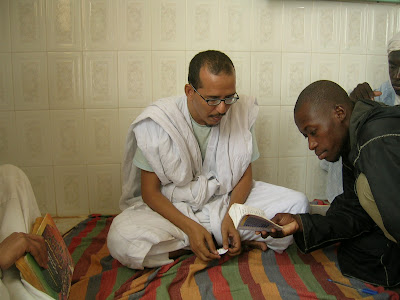 Date and Place of birth: 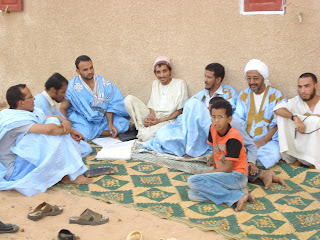 Ustadh Mishri is one of the youngest teachers in Nabbaghiya. He started teaching in 1987 and is essentially focusing on Maliki jurisprudence.
Publié par abdelmalik à 02:29 Aucun commentaire:

For any enquiry regarding studying in Nabbaghiya or in Mauritania in general, contact Abdelmalik on 00222 759 36 19 or email abdelmalik@hotmail.co.uk
Nous parlons aussi le français.